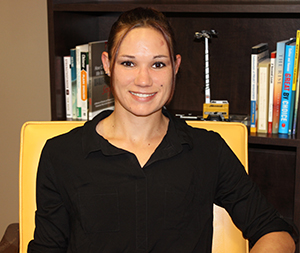 Unlike most 30 Under 30 honorees, when Jennifer Kruger, 27, started her manufacturing career, she had no experience in manufacturing. But after working at Allmand Brothers as a front line assembly worker for six months, Jennifer was promoted to second-in-command on her assembly line. Another six months later, she had taken the lead assembly supervisor position. Now in her second year at Allmand, Jennifer finds her job as lead assembly supervisor very fulfilling.

“As a lead assembly supervisor, I find it very rewarding to help my team succeed and be the best they can be, and to help in any way they may need, to make their job easier,” Jennifer said. “I motivate my team by trying to make it fun, exciting and challenging. I also try to always lead by example.”

“Jennifer has embraced this new role with extreme passion,” wrote Afton Hollertz, a continuous improvement engineer at Allmand who nominated Jennifer and is also a Manufacturing Engineering 30 Under 30 honoree herself (2013). “Our customer demands drive her every day and she will do whatever it takes to make things happen.”

Before working at Allmand, Jennifer had worked as a clerk at a local variety store. When her husband was sent overseas with the National Guard for a year, Jennifer stayed at home with their three daughters and started looking for work after her husband returned. She heard an advertisement on the radio that Allmand Brothers was hiring, and after asking her husband, who had worked at Allmand a few years ago for his advice, she decided to apply.

In her nomination letter, Afton wrote that Jennifer bridges the gap between veteran manufacturers and newcomers, and that her enthusiastic leadership style has improved performance on her team. Morale has improved dramatically on Jennifer’s team, leading to a decrease in turnover rates and record highs in productivity. Product quality has also increased.

“Her peers describe her as dynamite, driven, consistent, and humble,” Afton wrote. “I would describe her as inspirational. Jennifer is a prime example that anyone can be successful with little-to-no experience. Her passion and enthusiasm are contagious.”

When not working at Allmand, Jennifer enjoys doing anything that involves a little time outdoors—camping, fishing, gardening, hunting and spending time with her family. She also volunteers with her husband’s family readiness group for his National Guard Unit.

As for future career plans, Jennifer says she’s content to lead her team and work on the line as needed, but she’s keeping an open mind about her future. She encourages those without manufacturing experience or education to follow their dreams.

“Push yourself to be all you can be,” Jennifer said. “Never give up on yourself, no matter how frustrating it is. Believe you can do it. I always say the word ‘can’t’ is not in my vocabulary—I can do anything. Work hard towards your goal, even if nobody else believes you can do it.”